With a ridiculous battery test of over 55 hours, the over-ear, Bluetooth-capable Edifier W800BT headphones are wallet-friendly, comfortable, and stylish.

Hey everyone. This is Ian, tech reviewer at JimsReviewRoom. While a lot of the time, we review products near the top tier, it’s important to us here to also take a look at items for the more budget-conscious consumer out there. This headset I have here is the Edifier W800BT, surprisingly an over-ear, Bluetooth-capable pair of headphones available for only 49 dollars. The folks at Edifier were kind enough to send this over as a review unit to test, though my review was not altered in any way. As always, we’ll have the affiliate links up above – click on those links and they’ll give you the most updated prices in real time. 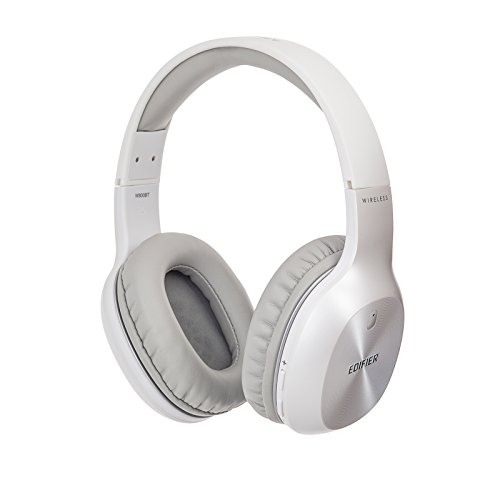 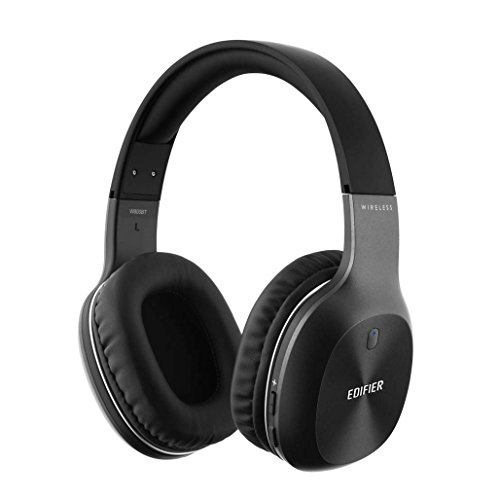 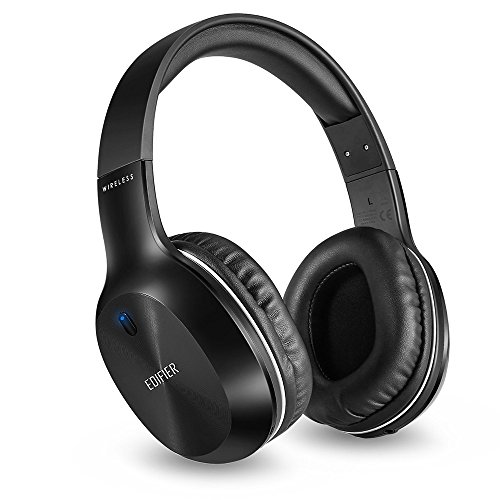 PHYSICAL DESIGN
Beginning with the physical features, the body of the W800’s is made of a resilient plastic throughout, it’s a bit rigid but not overly stiff or fragile. Over the top, the headband is lined with foam and faux leather, it feels pretty smooth overall, not brittle or too thin. As for the finish, it’s not a glossy plastic – more of a warm, pearlescent white, with black and red options available if you’re so inclined. On the backside of the drivers, there’s a textured concentric-circle pattern, glossy to stand out against the matte frame.

Moving onto the inside of the earcups, the earpads are upholstered with the same gray faux leather as the headband, tufted in around the edges. Edifier went with a closed back design, which does lead to a more isolated sound, though there can be more reverb as a result – I’ll talk more about that in my audio review. Here in the office, I was playing these headphones at 60-70 percent volume and had a very minimal amount of sound leak – from about five or six feet, the music was just barely audible to others while I listened at comfortable levels, so pretty great passive noise isolation.

It can be difficult to find over-ear headphones in this price range, but I felt there was a decent amount of ear space on this pair. The interior wasn’t really slanted back, but my ears never felt cramped within the earcups and what contact they did make was totally acceptable.

COMFORT
This brings me to comfort. The headphones were large enough for me, which means they should fit basically everyone. They extend with the traditional ratchet method, which on these, I’ll admit, can be a bit abrasive and feel like you’re about to break them, but throughout all my vigorous testing I never actually did any physical damage to the pair.

At 210 grams, the W800’s felt very comfortable across the crown of my head, the headband spreading the weight evenly without any noticeable pressure points or clamping at the jawline. The only real note I had as to comfort was that, because the earcups don’t horizontally rotate, they could sometimes lean slightly towards the rear of my head, rather than lying perfectly flat around the ears – though this was remedied by resituating the set every once in a while. All in all, I found them enjoyable to wear – no real fatigue or ear sweat.

TACTILE CONTROLS
Shifting over to the right earcup, there are three physical buttons for controls – all tactile and raised, I found them easy to feel and distinguish. The two volume buttons are on the back edge, and along with their usual controls, holding them down for a few seconds skips and goes back on songs. The power button sits at the top center of the right earcup, a quick double-click here pulls up Siri or Google Assistant and a single press when receiving a call also answers and hangs up.

MICROPHONE
Speaking of which, I tried out the microphone and calling features by calling Jimmy in the studio. Through the hallways, there wasn’t any echoing or hollowness to my voice, though outside wind was pretty noticeable. The W800’s also do a great job at cutting out background noise like footsteps and leaves, but we did notice that because the headphones lower those sounds so effectively, your voice is also lowered a decent amount – Jimmy had to turn his phone volume to maximum and still had to really pay attention to hear me.

CONNECTIONS
Moving on to Bluetooth, the W800’s come equipped with Bluetooth 4.0, and a claim of 30 feet of range. Testing them, I found they actually overperformed, as I was able to reach about 68 linear feet with my iPhone X, though this was with a direct line of sight. With some wall interference, range was decreased to about 40 feet. I also tested to see if they were able to pair to multiple devices, just to see if that convenience was there, and before I was able to connect to the office Pixel phone, I was forced to disconnect from my iPhone – just something to be conscious of if you plan on sharing the headphones with someone.

Each earcup has a connection at the base, with the right housing the micro-USB charging port, and the left, the 3.5 mm input. The cords for each of these connections were included, coated with a durable material and not thin or break-prone at all. Now, one of my favorite features about these headphones is that they still function when dead, so you’re never without a music option, as long as you have the hard-wired connection.

INSANE BATTERY LIFE
Though with a claimed battery life of 35 hours, in theory, that shouldn’t often be a problem. Of course, I tested this feature out by playing the headset at around 50 percent volume from full to dead, yet even after an astounding 55 hours, the headphones kept playing and playing – like a horror movie villain, they just wouldn’t die. Jimmy and I were both pretty amazed. If long battery life is the most critical factor for you, these will not disappoint. To fully recharge the headset, it takes about 3 hours. Lastly, in regards to battery, I did find myself wishing there were in-ear voice prompts, just to let me know what battery percentage remained, because currently, the only way is when the outer LED turns red.

SOUND TEST
Alright, time to get to the sound review. As far as loudness goes, I have no complaints. Most often, I was listening at about 55 to 60 percent volume, which I found provided the best audio experience. To really put the W800’s through the paces, I used them throughout the week, playing genres from EDM to classical, hip-hop to folk, and got an extensive feel of their overall sound signature.

Starting off in the bass ranges, they had a strong presence here. At 50 dollars, I was impressed with the amount of bass the W800’s could put out. From the thud of the bass drum intro to “Seven Nation Army” by the White Stripes to the synth-heavy riffs in Kavinsky’s “Nightcall”, the W800’s gave a bass-boosted, punchy performance that I felt added a lot of invigoration to the sound. I do want to note, that because bass was emphasized in the mix, there was some droning and distortion. But at this price range, bass fans will be quite satisfied.

Moving on to the middle ranges, there was some bass spillover, especially on the more forward aspects of the mids. On busy songs, you’re going to hear some congestion between instruments – though on more minimalist songs, vocals really shined. In the rock classic, “Great Gig in the Sky” by Pink Floyd, the female vocal solo stood out clear and crisp in the forefront, while the subtle piano accompanied her with warmth and nuance.

As for treble, it wasn’t a bad performance per se, but there was some harshness and lack of detail. On the crunchy snare drums of “Time” by Smog, the sound could sometimes be a bit ear-piercing, a bit abrasive, which did lead to some listening fatigue over time. But again, for fifty dollar Bluetooth over-ear headphones, there is often some give-and-take within the spectrum.

One area the Edifiers really stood out in their price range was in the sound placement. I actually did experience some directional audio, mostly when music sounded as if it was coming just from behind my ears. In Led Zeppelin’s “Rain Song” the lilting guitar riffs gave some width to the overall sound of the W800’s, as well as a bit of character.

CONCLUSION
So in the end, I felt for the price, Edifier presented a solid offering. You’re not going to find many brands selling over-ear Bluetooth headphones for under 100 dollars, let alone at this price point of 50. The audio isn’t perfect, but you can’t expect it to be. The overall sound was bass focused with forward vocals, and highs that were present but were sometimes a bit harsh on the ears. I’d say for this price, with the wireless convenience, look, comfort, and battery life, the W800’s are a great budget-conscious solution. Alright everyone, that’s it for this review, be sure to check back as we will be uploading more web-exclusive content in the near future.